RITM OKB ZAO is now Exporter of the Year!

RITM OKB ZAO (Taganrog, Russia) has won the regional stage of the prestigious annual “Exporter of the Year” award. We took the first place in the “Hi-Tech export” nomination for small and medium-sized businesses. 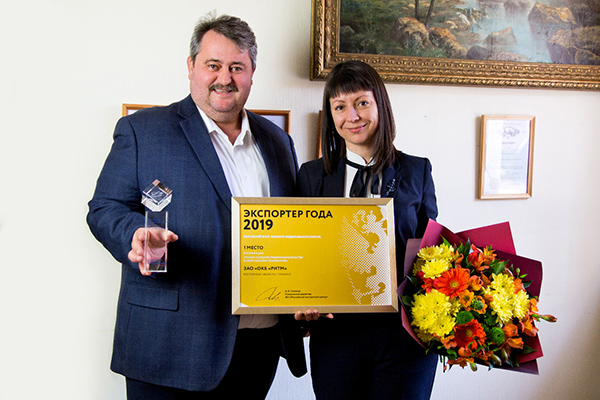 The second and third places were taken by OOO “NPP Neftehim” (Krasnodar) and OOO “Internet-fregat” (Novocherkassk), respectively.
“We are a bright example, showing that Russian technologies can not only be competitive, but also unique for the global market. Constantly increasing demand for our SCENAR device abroad and its spreading geography are proving that” – said General Director of RITM OKB ZAO Yury Starovoytov.

The award is given to companies and self-employed individuals who reached the greatest success in export of non-resource and non-energy goods and services, as well as intellectual products. Since 2019 it officially obtained a status of National Award.

The ceremony was held during the V Anniversary Yalta International Economic Forum. The importance of this forum for the economy can be proven at least by the fact that the total value of contracts and business agreements signed during this event exceeded 215 billion rubles.

The results of the final State stage of the award will be revealed during the VI International Export Forum “Made in Russia”, that will be held in November 2019 in Moscow.